Why it’s important Embedding servo information, that is, intermixing user data sectors with position information sectors, increased track density thereby increasing the usable capacity per disk drive; ultimately, all disk drives adopted this technology. An additional benefit for removable media drives was the elimination of complex and costly head alignment tools and maintenance procedures.
Discussion
Sector servo technology for disk drives was first patented by IBM's Robert Sippel in 1961, see US patent 3,185,972, but not introduced in any IBM product until much later (circa 1990). However, this patent required secondary transducers to keep track of position data when seeking.
Other technologies were easier to implement but ultimately limited in scope. At the time embedded servo was first introduced the state-of-the-art in positioning was about 600 tracks per inch using track following servos.
Early implementations in the middle to late 1970s included the Burroughs B9383 (1976), the CII Bull Honeywell Cynthia D120 (by 2Q77), the DEC RL01 (Oct 1977) and the Vermont Research 5017 (1975?).
RL01 Detailed information 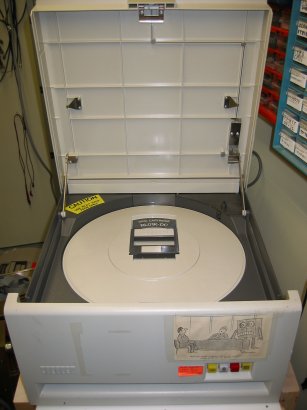 Lower maintenance costs and higher reliability than previous generations of cartridge drives were two of the major goals for the program. DEC had shipped approximately 100,000 of theRK05 cartridge disk drives that utilized a cartridge mechanically compatible to the IBM 2315, which had the advantage of being a front loader. The problems with the 2315 design were numerous and IBM dropped it in favor of the 5440 style after one product. DEC likewise followed suit and chose the top load 5440 plastics for its far superior mechanical and media protection properties.

However, since drives of this era required careful head alignment procedures and special track alignment reference media, this area remained a source of significant support costs and interchange incompatibility. Thus, the primary technology imperative was to develop a track following system that obviated the need for head alignment and guaranteed cartridge data interchange. It was also realized that ultimately all disk drives would require data track following so developing the technology first would create a competitive advantage. This goal was achieved with an embedded track following servo that utilized pre-recorded servo information between data sectors. (All DEC drives had a fixed block size architecture). Additional reliability/low maintenance cost features for the RL01/02 included a recirculating air system to substantially extend the life of the HEPA filter and universal spindle and power supplies so there was only one model for worldwide installation. A custom fan assembly also enabled the drive to set a new standard for in office audio noise levels from a 14" disk drive.

The initial concepts were developed by Hertrich Consulting, which was under exclusive contract to DEC.The major challenge was to develop a servo technology that had no secondary transducer, i.e. all velocity and position servo information when seeking or track following would be obtained from the embedded servo bursts. Fred Hertrich provided much of the detailed initial design and was assisted by Dick Laatt (sp?) for the data channel. Pete McLean from DEC designed the controller for the PDP-11.
RL01 shipments began in October 1977 with Initial production in a leased ex mobile home factory in Fountain, CO. Production then moved to a permanent facility in Colorado Springs and later in Kaufbeuren, Germany.
DEC was growing rapidly at the time and the storage business even faster, requiring new manufacturing facilities around the world. Grant Saviers from Engineering and Dave Brown from Manufacturing convinced Ken Olsen, after a lengthy debate, to locate Manufacturing and Engineering in Colorado. This would be DEC's first (and only) major engineering facility more than a short drive from Ken's office in Maynard, MA. Dave & Grant selected the 330 acre Rockrimmon site and commenced construction of a major facility for the design and manufacturing of disk drives, disk subsystems, and later cluster controllers. The site grew to about 1 million square feet of facilities before DEC cratered in the 1990's.
Anecdote: The Rockrimmon site was zoned residential and Colorado Springs was anxious enough to become "Silicon Mountain" that it rezoned the site providing DEC made some site improvements. Thus, DEC built its first and only railroad bridge for the frequent coal trains to the Pueblo power plant. Sometimes, "you do what you gotta do". This site was far and away one of the most spectacular manufacturing sites in the USA, with a panoramic view of Pikes Peak.

Provenance note: This article was written by G Saviers. Version 11 of this article was reviewed and approved by the Computer History Museum's Storage SIG on June 20, 2012.