Why It's Important
An early if not first example of the use of a systems approach to the recording channel to operate at lower bit error rate (BER) than traditional, i.e., worse than 1 error in 10 million bits transferred, thereby allowing higher areal density and more net user data. This became the standard approach to channel design by the early 1990's. 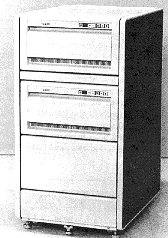 DEC's HDD Corporate Consulting Engineer, Mike Riggle, (CDC prior to DEC) devised a plan to beat IBM in areal density based on lower BER. DEC couldn't match IBM on head and media technology so they attacked where they believed they had two intrinsic system advantages - all DEC OS's used fixed block size disk storage and DEC had free choice of subsystem partitioning with its DSA (Digital Storage Architecture).

DEC wasn't making heads or disks at the time so were constrained by what they could buy (1978-85). Later, DEC made their own thin film disks and heads.

The first product using the low BER/DSA approach was an integrated with controller 8" fixed plus removable disk drive code named AZTEC (A to Z technology). It was way late (A to Z being a bad idea as it included an unloadable negative pressure head, and more). The AZTEC become the
RC25 which according to Disk/Trend shipped in 4Q83 at 1,000 tracks per inch (tpi) and 12,350 bits per inch (bpi) for an areal density of 12.4 million bits per square inch (Mbit/sqin). Even though the AZTEC was installed on the US fleet of nuclear submarines it was not a commercial success.

The more significant product was the RA81, which shipped 1982 at 960 tpi * 11400 bpi = 10.9 Mbit/sqin. It had all of the DSA features, including a 170 bit Reed Solomon error correcting code (RS ECC), and 1,7 code that was somewhat better than the IBM 2,7 code used in its mainframe disk drives. The data separator was in the drive, so that multiple generations and types of technology could be attached to a single controller. The interconnect, called the Standard Disk Interconnect or "SDI" was serial, 4 pairs, transformer coupled and a radial interconnect for maximum reliability, throughput, and installation flexibilty. RA81 was ahead of IBM on the areal density curve. The ECC generation, much of the error correction and all of the error detection was handled by custom ASICs in an external DSA controller. If the controller couldn't correct, there was additional help from the
driver. DSA also included elaborate bad block revectoring so all disks were always "perfect" from a Logical Block Number perspective. Other features such as quadruplicated headers were provided since they had to tolerate the lower BER and an additional error detection code to assure the actual
data transfer to the controller.

The areal density trend line attached indicates that these products were well above the industry trend line but not unique.

The R80 family was comprised of four products. The first to ship was the 124 MB RM80 (1981) which attached via the existing Massbus I/O interface. Massbus was a 16/18 bit parallel daisy chained data bus, proprietary to DEC and used for higher performance disks, tapes, and solid state
secondary memory. Different technologies could be mixed on a single controller. The RM80 was considered a "practice run product" since the DSA controllers were not finished and it was DEC's first product with Winchester technology. The first DSA product the RA80 shipped in January 1982; it
had the same capacity as the RM80. In September 1982 the RA81 shipped with 456 Mbytes capacity. The capacity was increased by almost 4 times that of the RA80; perhaps the industry's highest increase in one generation on the same mechanical platform. The last product was the RA82
at a capacity of 622 MBytes which shipped in 4th quarter of 1987. DEC negotiated at length with STK to produce R80 HDA assemblies as a captive second source, but the deal was never finalized.

Provenance Note: This article was authored by Grant Saviers and edited by Tom Gardner. Version 15 was reviewed and approved at the Computer History Museum Storage SIG Meeting on June 21, 2011, and published as DEC AZTEC / RA81 Disk Drive.