Why It's Important
Marks the entry of DEC into the moving head disk drive business as a manufacturer. DEC had previously manufactured only its own head per track drives.
Established the 2315 cartridge as the primary mass storage device for minicomputers 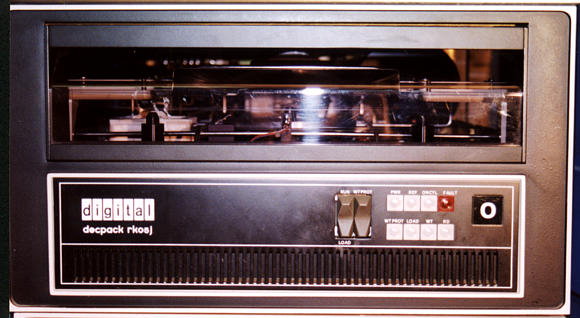 In 1970, newly formed disk drive companies were bringing the first low cost (under $5k OEM, under $10k to end customer) disk drives to the market based on the IBM 2315 cartridge. IBM had first introduced the 2315 cartridge on the 2310 drive in 1965 with the 1130 computer. DEC chose to initially buy a drive from Diablo (Model 31), and instead of exercising the agreed manufacturing license, designed its own product using the same cartridge data interchange compatible with Diablo. The drive was shipped in 13 months from start of project and demand exceeded forecasts by a factor of 5.

The RK05 cartridge for DEC (and the Diablo 31 for other minicomputer companies) became the preferred personal portable storage device. It enabled "load and go" of different operating systems on the PDP-11 and PDP-8, provided essentially unlimited offline data storage, and provided data interchange among compatible systems. It was the first cost effective moving head disk storage for mini's.

The huge success of the RK05 proved problematic for DEC. A disk drive was a new technology to mini-computer operating systems and the initial software support (drivers) were inept in handling the various states and error conditions common for disk drives. DEC's field service technicians, although excellent at logic trouble shooting, were very unfamiliar with routine disk maintenance and adjusting of electromechanical peripherals. DEC manufacturing was highly challenged to build a product of the RK05 technology and complexity. Lastly, but not least, the 2315 cartridge was a reliability and contamination control disaster and engineering did not understand these issues nor adequately design the product to mitigate them.

In spite of these startup problems, the RK05 (and successors, see e.g. DEC RL01) had a long and extremely profitable product life. Initially introduced as the RK05, later a model with improved cartridge handle mechanisms, and lastly as a fixed disk version with 5 Mbytes of capacity. The product was first shipped in 1971 and manufacturing ceased about 1979.

The technology used in the RK05 was more similar to plug compatible 2314 drives of the era than to other 2315 cartridge drives. The head actuator was a linear voice coil motor with an optical grating position transducer. Standard 2314 heads were used with a RK05 unique mounting tail. Density was 2200 bpi by 100 tpi, with a conventional peak detected clock recovery. The ac spindle motor drove the spindle via a belt. Uniquely, the power supply was built in and all regulators were flyback switchers, probably the first time this technology was used in a disk drive.

The disk to controller interface was compatible to the Diablo 31 and controllers were built for PDP-8, PDP-11 (Qbus & Unibus), and PDP-15

Grant Saviers was the Project Manager. DEC hired several experienced disk drive engineers from Honeywell, which had just decided to move its disk drive operations from Billerica, MA to Oklahoma City. Elmer Simmons was the overall electronics architect, R/W, and analog expert, Dale Jensen did the servo, Guenter Schneider was the one and only ME (he did it all!), Winston Sergeant did the power supplies, and Mac Sloan was the draftsman. The first controller was for the PDP-11 and was designed by Tom Orr. The lifetime subsystem revenues exceeded $500M.

Provenance note: This article was written by G Saviers with contribution by Tom Gardner. Version 7 of this article was reviewed and approved by the Computer History Museum's Storage SIG on June 20, 2012.