Why this is important 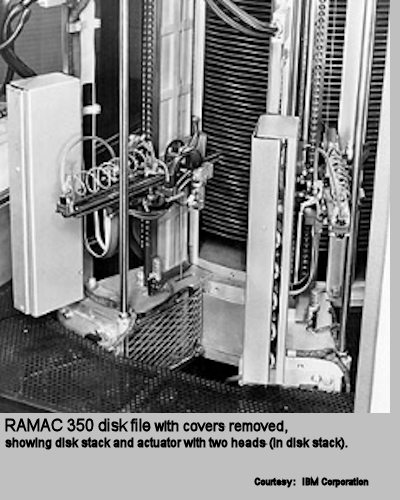 This patent is fundamental because it is the earliest known patent to have claims that cover all modern disk drives, for example, see claim 5 reproduced below. It was so recognized by IBM with a 1970 Outstanding Invention award to the named inventors [1970 IBM], acknowledged in the history of the IBM San Jose Laboratory "as the basic disk file patent.” [1977Kean p. 114] and in an apparent reference to this patent, Al Shugart stated, "Bill Goddard [one of the named inventors] was awarded the fundamental RAMAC patent, assigned to IBM and received a belated cash award for his efforts. I guess that makes Bill Goddard sort of the grandfather of the industry." [1998Shug]
Although the patent is fundamental it is controversial in that the named inventors are not the only IBM employees that invented the RAMAC and the claims as issued are broader than the disclosure of the patent. These controversies came from changes made as a consequence of the splitting the patent into two patents (technically, divisionalization) during its extended prosecution.

Invention, like success can have a hundred fathers. Inventors, under one definition, are the named individuals on the face of a patent who are in the United States given constitutionally based exclusive rights to their US discoveries. [US Constitution, USC Title 35 § 115] with similar rights granted for patents in other jurisdictions.

The invention of the hard disk drive was clearly led and inspired by Rey Johnson, the IBM San Jose Laboratory Director, with the day to day management of the project led by Lou Stevens beginning November 1, 1953. [1977Kean p. 31]. However, 5,600 miles away and more or less simultaneously, a prolific German inventor Gerhard Dirks [Note: 1] was inventing the same thing.

During World War II, Dirks as a Russian prisoner of war in occupied Germany was incarcerated for several years in a building containing a technical library. Dirks, with little else to do, spent his time reading and studying in the library during which he conceived versions of magnetic drum and core storage. When the war ended, he returned to his former employer, the Krupp Company, but failed to interest it in taking a license to his German patent application. A small German company, Siemag Fein Mechanische Werke GmbH, that manufactured bookkeeping machines did show interest and, in return for an exclusive German license, paid Dirks a modest sum, enough to enable him to file his patent application worldwide.[2000Birk] 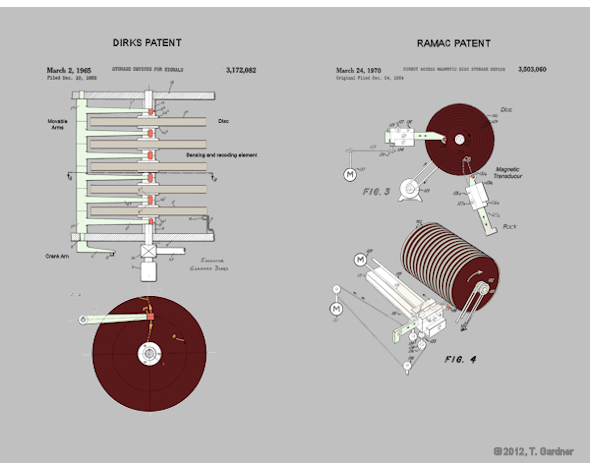 On December 14, 1954 Lou Stevens, Ray Bowdle, Jim Davis, Dave Kean, Bill Goddard and John Lynott of IBM San Jose filed a US Patent application as the co-inventors of the several potential inventions disclosed therein. It is interesting to note that not listed as inventors were G. A. Hotam, the IBM engineer responsible for the concept of disks on a shaft and John Haanstra, the manager who led to the invention's first reduction to practice[1986Basche].
Because under US law a patent can claim only one invention in 1962 the application was split into two applications, one relating the the RAMAC 305 System itself and one relating to a Magnetic Transducer Mounting Apparatus [Note: 2]. The two applications were identical as to disclosure and drawings and when issued were substantially identical differing only in the claimed invention.
The broad claims on Disk Drives were not originally in the IBM application that became the '060 patent but were added by IBM during the application's review by the US Patent Office.

On December 9, 1955 Gerard Dirks filed in Great Britain a patent application which after US application issued in March 1965 as US Patent 3,172,082 containing broad claims on Disk Drives in general. In October 1965, IBM requested to amend the then current application to add five claims, literally copied from the Dirks patent thus creating an interference [Note: 3] with the Dirks patent. The Patent Office determined the IBM had been first to invent and thus allowed the added claims and restricted those claims in the Dirks patent.

It should be noted that had IBM not split the application in 1962, then Dirks would have owned the Disk Drive Patent since there would have been no ongoing application for IBM to amend. In such a hypothetical, by virtue of public sale, IBM's un-patented RAMAC disk drive art would have entered the public domain and represented prior-art..

In a remarkable coincidence IBM was already licensed on the Dirks patent, having paid him a one million dollar license fee in 1961 for all rights to his patents [2000Birk] and moving him to California where he was for a time a special "IBM Fellow" at the IBM San Jose Laboratories reporting to Rey Johnson [2010Hoag].

An example of the broad claim to disk drives is Claim 5 of the '060 patent which was copied from Dirks,. The sworn declarations of the six applicants suggests their roles in the disk drive invention as follows:


Given the declarations of the six applicants it is quite surprising to only find two inventors listed on the face of the '060 patent. It is also quite contrary to the recollections of team members; in their view the invention of the RAMAC disk drive was not principally the work of Goddard and Lynott. Their being awarded the fundamental disk drive patent appears to have resulted as a consequence of the prosecution of the application.

The '060 patent application originally only had narrow claims limited to just those relating to ""A magnetic transducer mounting apparatus ..." In August 1963. before the Dirks patent issued, the six inventors declared that only Goddard and Lynott were the inventors of that apparatus and successfully petitioned the Patent Office to have the four non-inventors removed from the application. Subsequently. the claims were then greatly expanded by the addition of the Dirks claims but the IBM attorney did not go back to reinstate any of the four removed applicants. Based upon Steven's listing as an inventor of the earlier '097 it is clear that he should have been listed as an inventor of this patent. Furthermore, from their declarations, it is possible that Bowdle, Davis and Kean could have been listed as inventors of the '060 patent when the claims were added that covered all disk drives.

In recognition of their RAMAC activities, W. Goddard and J. Lynott were inducted into the Inventors Hall of Fame in 2007 and Lou Stevens was inducted in 2008. The originally proposed 2007 citation to Goddard and Lynott was for having "invented magnetic disk storage"[2007Hoag] but a number of RAMAC veterans worked diligently to assure that the three citations recognized that RAMAC was a result of a team of people, led by Stevens and in particular including Goddard and Lynott for their magnetic transducer mounting apparatus and pressurized air bearing work.

1. According to a search of the database of worldwide patents maintained by the European Patent Office, over a 30 year span (1940s - 1970s) , Gerhard Dirks (1910 - 1990) was the named inventor on in excess of 100 patents many relating to magnetic storage technologies including core. drum and disk technologies. In acknowledgement of this an oral history of Dirks was taken by the Charles Babbage institute beginning September 28, 1978, see: The Charles Babbage Institute Newsletter, May 1, 1979, p.3
2. Technically this is called a divisionalization, where each additional invention is carved out of an application leaving behind just one invention.
3. When two patents or their applications cover the same material they "interfere" and can be divided into multiple applications separately covering each invention. Under US law the first to file has priority and is normally awarded the associated claims. In this case the broad claims of the Dirks patent were determined to belong to the application that became the '060 patent.
4. Inventor's roles are taken from their declarations submitted in paper 12 of the patent application, August 12, 1963.

Provenance note: This article was originally authored by Tom Gardner and was approved by the Computer History Museum's Storage SIG on February 29, 2012.