Why it is significant

The Giant Magnetoresistive Effect improved the sensitivity of the read head by an order of magnitude or more over the prior generation of magnetoresistive heads, thereby allowing the continued increase in capacity. 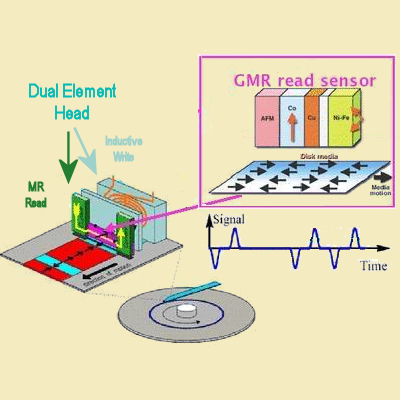 Increases in areal density, necessary for the increase in hard disk drive data storage capacity, are a consequence of an ever decreasing volume of magnetic material that represents one or more bits of user data. As a consequence it takes continuous improvements in all aspects of the recording channel from the media thru the read/write head and including the associated electronics and mechanics.

The GMR effect was discovered by Albert Fert (University of Paris-Orsay) and Peter Grunberg (Julich Research Center ) in 1988, for which they received the 2007 Nobel Physics Prize. The Fert/Grunberg demonstration used extremely high magnetic fields, a film deposition process that was not compatible with high volume production, and very low temperatures associated with physics laboratory equipment (-449 degrees F) which in combination made the effect of little commercial value. By 1990, the team of Bruce Gurney, Bernard Dieny and Stuart Parkin, led by Virgil Speriousu at the IBM Almaden Research Center, overcame these problems with the invention of the spin valve GMR sensor, which enabled room temperature operation, used a manufacturable film deposition process, had the required sensitivity to small magnetic fields, and was magnetically stable in operation. Multiple subsequent inventions increased the sensitivity and stability of the device. Speriousu and Gurney received the 2004 IEEE Reynold B Johnson award, in part, for this work.

In late 1996, IBM research and development teams realized that to continue the rate of progress in areal density, the then-industry-standard AMR effect had to be replaced by a much more sensitive read sensor. The GMR effect, which had been improved steadily by a team at IBM then led by Gurney was the only candidate available. By 1995 the GMR spin valve sensor had demonstrated more than a 12% change in resistance at room temperature for a small magnetic field such as might be encountered in a disk drive sensor. This was about a fourfold improvement over AMR. However, despite the great opportunity of GMR, there was some risk in changing the AMR head production to GMR even thought the sensor construction was very similar. Actual production yields, and future field problems of GMR were unknown. Laboratory stress testing and measurements on a small number of development parts could not substitute for actual high volume production and customer use. This was unlike the introduction of MR heads, which had extensive use in many other applications before being introduced as a read sensor for HDDs, and had many years of development.

In late 1996, Bob Scranton, leading the worldwide IBM head team, and H Terashima, leading the IBM HDD technology development team in Japan, decided to initially introduce the GMR head into a very high capacity desktop (3.5 inch) disk drive, code-named Titan. This product segment took best advantage of the high areal density capability of the GMR head while at the same time minimizing business risk since as a niche product, intended for desktop computers with unusually high demands for date storage capacity, the total production volumes would be low. The factory could meet production quantity even if the resulting yields were low. To resolve one of the reliability concerns, special electronic circuitry was added to re-align the head magnetics within the drive, automatically, if necessary. This project became a very high priority within the IBM team, with large effort from research, development and manufacturing, displacing other projects. By October , 1997, based on increased confidence from limited head production, extensive component stress testing, and some limited HDD testing, the team decided to announce the product in November 1997.

However, almost immediately after announcement, an apparent problem arose. Accelerated life testing projected that the GMR read head sensitivity would degrade over time and result in an unacceptable failure rate. After two months of furious work the engineers determined that the degradation in sensitivity was limited, and soon stabilized at a constant value of about 85% which allowed acceptable product reliability. The underlying cause was understood and eliminated in future designs.

On December 24, 1997, in Japan, the Quality Assurance team gave their approval for shipment of the 16GP Deskstar hard disk drive. The rest of the industry began commercialization of GMR heads during 1998 and by 2000, 100% of HDD production worldwide included GMR sensors.

The GMR effect went from a laboratory demonstration in 1988 to broad consumer use in 2000 and a Nobel prize in 2007.

The sensitivity of the read element of this class of heads was improved further via adoption of the tunneling magnetoresistance (TMR) effect. This effect was first predicted by John Slonczewski of IBM in 1974. It eventually enabled approximately another tenfold improvement of the sensitivity of the read element, which allowed for further improvement of SNR. Seagate was first to commercialize TMR heads in 2004. The rest of the industry commercialized TMR heads in 2005.

Provenance note: This article was written by R Scranton. Version 30 of this article was reviewed and approved by the Computer History Museum's Storage SIG on June 20, 2012.