The next of generation of disk drives following the IBM 350 disk storage (RAMAC) totally changed the concept of the disk drive to one with a head per surface with spacing set by flying heads on the spinning disk surfaces; this concept has endured ever since. It offered greatly increased capacity and much faster access time than the IBM 350, allowing real time applications in addition to capabilities to provide more complex business data processing. These technical advances and performance capabilities opened up the computer industry to the real potential of magnetic disk storage.

The basic concepts of heads flying on a disk were proposed by Jake Hagopian well before RAMAC became a production unit;he realized the RAMAC design was a one of a kind approach and much shorter access times and higher densities would be required. His notebook as early as September of 1954 shows a flying head as well as a head per surface comb access.Hagopian first thought of this and demonstrated the principle to everyone in the IBM San Jose laboratory which in essence made him the "inventor" of the first disk drive with a head per surface. In early 1955 Rey Johnson, IBM's San Jose Lab Director, established the "Advanced RAM" project to explore this technology.[Bashe1986 p. 300] Hagopian also chose the original approach of using perpendicular recording in this exploratory project.This was in contrast to the longitudinal recording, ring heads and coated particulate disks of RAMAC.

In 1956 IBM San Jose first committed this technology to a product, the IBM 353 disk storage (then known as Stretch disk file) a component of the to be announced7030 (Stretch) system. [Harker1956] During 1957 Jack Harker's team including Russ Brunner, Bill Gross, and Ken Haughton did the fundamental research to define stable regimes for air bearing flying heads.[Brunner1958]

Late In 1957IBM San Jose began a second product based on this technology, the ADF (Advanced Disk File)also using perpendicular magnetic recording with flying probe heads and oxidized steel disks. [Bashe1986 p. 308] The ADF disk file and the Stretch disk file were developed in parallel sharing most components [Kolsky1959]; including dual hydraulic actuators,moving 40 heads each on a stack of 50 disks similar in construction to the disk stack of the IBM 350 (but using steel disks). The principal difference being that the Stretch disk file accessed data on 40 heads in parallel while the ADF disk file, like most of today's disk drives only accessed data from one head at a time.
A January 1960 audit concluded that the three new technologies contemplated for the ADF and Stretch drives, that is:
had not been integrated and tested sufficiently under non-laboratory conditions; in particular, it was clear that the surface quality of the steel disk was unacceptable.[Hoagland2003] In order to speed progress perpendicular recording was dropped and a number of personnel changes were made including: Al Shugart as Engineering Manager, Jack Harker as Air Bearing Development Manager of head-disk flying heads and Al Hoagland as Magnetic Recording Technology Manager.Ralph Golub remained the Stretch development manager.A return to longitudinal recording was made, the universal method used for drums, disks and tape. .

In order to meet its commitment to the Stretch program, Vic Witt, the IBM San Jose Lab Director had the Stretch drive team develop an interim version using using coated disks with air loaded heads (similar to the IBM 350 heads). The interim product shipped to IBM Poughkeepsie in late 1960 and then to Los Alamos in April 1961. It was the first drive with a head per surface to ship to a customer. It was replaced by a production 353 disk storage.

IBM disclosed the theory and practice of flying heads in three articles (“A Gas Film Lubrication Study – Parts I, II & III”) in the July 1959 IBM Journal of Research and Development. This publication along with the delay resulting from the failure of the steel disk enabled competitor’s to beat IBM to the market with its own technology. Bryant Computer Corporation shipped its first such drive in 1960 as part of the MOBIDIC B military system. Librascope showed such a drive in 1962 as part of its L-2010 rugged portable computer.

In 1961 the first production models of the Stretch drive were shipped as the 353 disk storage for the 7030 (Stretch) system; its capacity was 2,097,152 words of 72 bits (64 data bits), equivalent to 16 MB, with a data rate of 2 MB/sec . Only limited numbers of IBM 353 disk storage were ever shipped at least in part due to IBM's cancellation of the Stretch program. 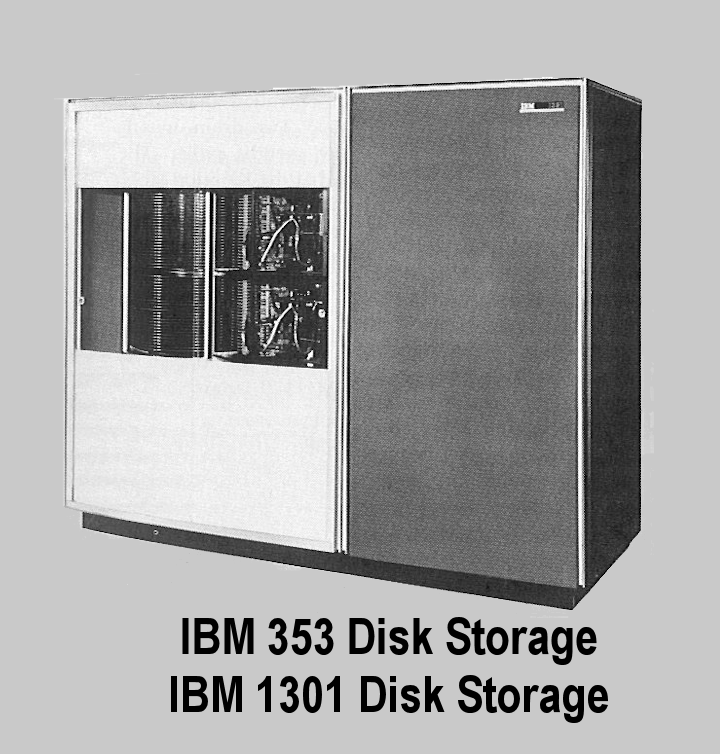 In the third quarter of 1962 the first production models of the ADF drive were shipped as the 1301 disk storage to American Airlines for the IBM 7090 based SABRE Airlines Reservation System. In an unpacked 8-bit mode the 1301 had capacity on two modules of 43 MB and transferred data at 560 kbits/sec. The 1301 and variants such as the 1405 were broadly attached to IBM's early mainframes making it an extraordinarily successful program.

The image to the right is actually that of an IBM 1301; however at this level of detail it is indistinguishable from an IBM 353. The dual hydraulic actuators and disk stack can be seen thru the window. The principle difference is in the arrangement of the electronics in the two gates behind the covers (front and rear) on the right in this image. The 353 had six panels of read amplifiers for the 80 heads (two banks of 40) [IBM353] while the 1301 required electronics for on one recording channel [IBM1301]. .

Perpendicular recording remained a laboratory curiosity for disk drive applications into this century; it was first used in a volume production HDD by Toshiba in 2005.

This page was originally authored by Al Hoagland; but is now substantially revised. Hoagland's last approved revision was version 23