Why it’s important:
The ever shrinking and improving hard disk drive has been enabled by the transition to a motor/spindle based upon brushless dc motor technology first implemented in production hard disk drives by the 1979 International Memories, Inc (IMI) 7710. Papst-Motoren the early technical leader and significantsupplier was by 1989 replaced in the market by Nidec.
Discussion

Beginning with the first hard disk drive (HDD) in 1957 the mechanism for turning the disks of the drive has evolved over more than fifty years from large ac motors connected to a separate spindle to brushless dc motors fully integrated with the spindle. Similarly contamination control evolved from external blowers with large air filters to sealed units with small breather and internal filters. Ultimately the spindle ball bearings were replaced by fluid dynamic bearings. Collectively these improvements supported smaller size, lower cost, higher reliability, less noise and higher density.
The first HDD, the IBM RAMAC 350 initially shipped with a large ac motor directly mounted to the spindle but soon after shipment it switched to a gear drive connecting the motor to the spindle. Airborne environmental contaminants were not a substantial problem since its hydrostatic heads floated on filtered clean air supplied by a compressor[1].
However a spinning disk creates a low pressure region at its center that without amelioration would suck contamination into the head disk region. The first HDD to use self-flying heads, the Bryant 4000 enclosed the heads and disks in a clean region using a blower to feed by room air thru a one micron particle filter[2] thereby preventing contamination through the spindle.[3] A large machine the spindle was driven two belts connected to an ac motor.[4] By the 1970s most disk drives[5] were constructed in this manner. 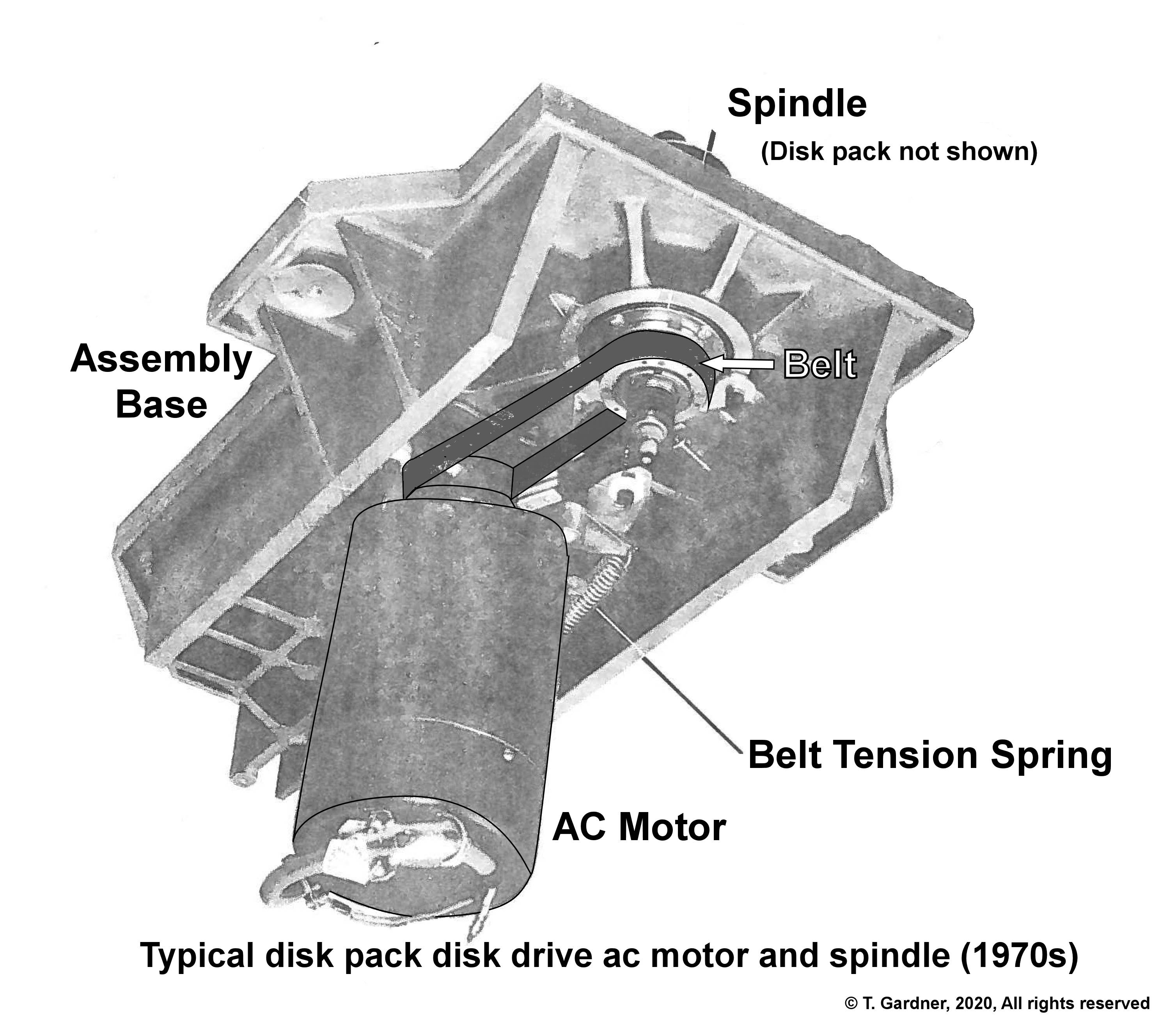 As illustrated by the figure to the right (for a disk pack drive) an ac motor is connected to the spindle with a belt pulley system. As in the Bryant drive, contamination by leakage through the spindle bearing was eliminated by pressurizing the disk area with clean air so as to cause some air to flow out through the spindle bearings. Flow needs to be outward but minimal so as to avoid drying out the bearing’s lubricant. Means of minimizing flow thru bearings include bearing shields and other mechanical barriers such as Nilos rings and ferrofluidic seals.
AC motors are reliable and provide the large torque required for the 14-inch and larger disks used in most early HDDs; however, HDDs of that era required one rotational speed and since an ac motor’s rotational speed is determined by line frequency this required mechanical designs specific to a country – typically a pulley change. Speed variation due to pulley wear was also a problem.
Librascope in the 1960s produced a line of HDDs with smaller disks using ac motors directly connected to the spindle thus eliminating parts.[6]
The early 1970s saw the first use of brushed dc motors in HDDs. DC motors have the advantage that speed can be precisely controlled independent of ac line frequency. The 1970 Diablo Model 30 cartridge disk drive directly connected the motor to the spindle.[7] The 1976 CDC Model 9414 integrated a brushed dc motor into the spindle. Brushes wear out and generate particles, neither of which is desirable in an HDD. The 9414 used a labyrinth seal between the rotating cup of the spindle and the fixed parts of the motor[8] to keep particles, including brush particles out of the clean head and disk region.
The late 1970s saw the beginning of the transition to smaller disk drives using disks less than the then standard 14-inch diameter[9]. Volume and cost precluded the use of blowers in the smaller HDDs leading to the use of an internal filter to capture particles and a breather filter to control flow into and out of the clean region as air pressure changed.Simultaneously these constraints led to the introduction of spindle motors using brushless dc motor technology initially by companies such as IMI (International Memories Inc.) and Memorex.

The integrated design uses fewer parts than the direct connect design, enables thinner drives and by locating the disks between the bearings minimizes mechanical disturbances. It has been adopted throughout the industry.
In the 1970s and 1980s Papst-Motoren KG, St. Goergen Germany, was a leading motor manufacturer with a technical sales representative calling on all the US disk drive manufacturers. The IMI motor patent used for the illustration on the left above was jointly assigned to Papst and IMI[10]. Papst’s US Patent 4,535,373[11], used for the illustration on the right above claims the use of labyrinth seal in HDDs interactions even though the invention appears to have been anticipated in both the Memorex 101 and the CDC 9414. These are two examples of the more than 40 patents on HDD’s and their motors that were issued to Papst as a result of its close design relationship with the HDD manufacturers. Papst sued most HDD manufacturers, some more than once, and collected more than $100 million in settlement royalties.[12] A supplier to many HDD manufacturers during the 1980s, Papst lost market share to Japanese manufacturers and essentially exited the manufacturing of spindle motors in the 1990s. It continued as Papst Licensing GmbH suing HDD manufacturers into the late 1990s.
Nidec Corporation, Kyoto Japan was founded in 1973 as an ac motor company and in 1984 started production of spindle motors for 3½-inch HDDs.[13] It is known for active use of mergers and acquisitions as a strategy to grow its businesses. In March 1989 Nidec acquired Shinano Tokki Co, Ltd, a leading manufacturer of spindle motors for hard disk drives gaining the largest share of the independent spindle motor market in the world.[14]” It continued to dominate the global spindle motor market into this century with a 2003 market share of over 65%.[15]"
In 1994 Maxtorbegan using fluid dynamic bearings in place of conventional ball bearings for their superior precision and performance.[16] Maxtor abandoned this technology but then the industry led by Seagate reintroduced it so that by 2004 such bearings dominated production. Nidec while not initially a leader in this technology acquired production facilities and knowhow from Seagate in 2000 and as of 2019 was supplying 80-85 percent of all HDD spindle motors used globally.[17]
References:
[1]IBM Type 350 Parts Catalog, February 4, 1958, Form #12-7756-0, Sheets 38 &39/44
[2]“Bryant Series 4000 Disk File”, CDC Corp., Publication 60127000, October 1966, p. 318/356.
[3] Although outbound flow is desirable it needs to be minimized in order to not dry out bearing lubricants.
[4] Ibid, Bryant, p. 137/356
[5] By the 1970s most HDDs used removable media with a mounting hub that presented design challenges; however, for compatibility were generally based upon IBM designs. Beginning in the mid-1970s non-removable media drives (“fixed disk drives”) gradually replaced removable media drives and by 1990 they were in very limited production, e.g. SyQuest and Iomega products.
[6] See e.g., “Series L107 Disc Memory System – Model L107A” data sheet, Librascope div of Singer. © 1971, 1974, specifying ac power to motor.
[7] See e.g., US Patent 3,691,542, “Magnetic Memory Disk Drive Apparatus With Reduced R. F. Noise,” A. Gabor, filed November 2, 1970, Diablo Systems assignee
[8] Personal disassembly and inspection by author.
[9] The first 8-inch HDD, the IBM 62PC was introduced in 1979
[10] US Patent 4,337,491, Brushless D.C. Motor Assembly, filed May 29,1980, Alfred Hasler (of IMI), & Bernhard Schuh (of Papst)
[11] US Patent 4,535,373, Labyrinth Seal In Disk Storage Drive, CIP filed March 5, 1980, Bernhard Schuh of Papst
[12] “Georg Papst Died.” Press release, Papst Licensing GmbH, March 2012.
[13]Nidec Website
[14] Nidec, January 22, 2002, Amendment 4 to Form F-1 Prospectus, page 70
[15] Nidec 2003 Annual Report, page 5
[16] “Fluid Dynamic Bearing (FDB) Technology,” Nidec Technical Paper,
[17] “Spinning in infinity: Exclusive insight into industrial technology giant Nidec,” Robots & Automation News, April 10, 2019,

Provenance note:
In 2007 the Computer History Museum's Storage SIG voted the IMI 7710 as a significant product in hard disk drive history for its first usage of a brushless dc motor in a production hard disk drive. A prototype of this web page was completed on November 12, 2007 and it remained essentially unchanged until a major update was posted by T. Gardner on April 2, 2020.Warren Dalziel and Grant Saviers provided technical information for this update.