The Memorex 630 was “plug compatible” with the IBM 2311 (quadruple capacity of the IBM 1311) in that it connected to IBM System/360 computers thru the IBM 2841 Storage Control Unit. It's disk packs were interchangeable, that is, “media compatible” with packs written on the IBM 2311. 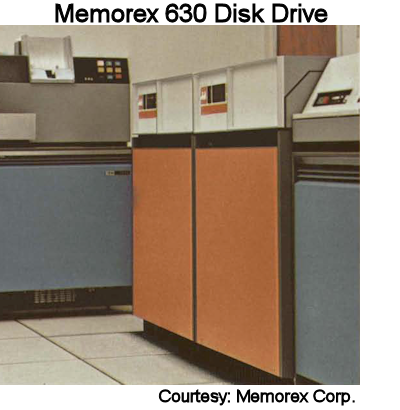 It is an urban legend, denied by Memorex executives, that Memorex decided to enter the plug compatible disk drive business when IBM refused to give a volume discount on the IBM 2311 for a then contemplated key to disk system. What is true is that the IBM price of about $27k, versus an estimated cost of $1.7k presented a revenue and margin opportunity by which Memorex could begin implementing its strategic plan of entering the systems business.

In 1966 Peripheral Systems Corp was formed by Memorex under Bob Brumbaugh and staffed mainly with ex-Ampex engineers to pursue 2311 plug compatible disk drive development using a hydraulic actuator like the 2311. Larry Wilson was the first ex-IBM engineer to join Peripheral, and he, along with Cliff Akers persuaded Brumbaugh to recruit Roy Applequist who had worked on voice coil motors at IBM and before that at Boeing [souce: email from Akers]. Applequist joined Memorex in April 1967 and the project quickly switched to a voice coil motor. Other key engineers on the project included Dave Jepson (recording), Joseph Moos (servo) and John Richards (electronics). Ken Fannin was the chief engineer. The productivity of this group is noteworthy when compared to the size of a then typical IBM disk drive development project (30 to 90 persons) or the "dirty dozen" [12 ex-IBM engineers] who in December 1967 foundedInformation Storage Systems (ISS) the second disk drive company to ship a plug-compatible 2311.

Noteworthy features include the voice coil motor, ramp loading of heads, a "baby buggy" carriage and mechanical detenting to a rack on the carriage. It's seek time was substantially faster than the 2311 and arguably, because of fewer parts, it was marketed as more reliable. This is likely the first use of ramp loading in a hard disk drive; a feature used all subsequent in most removable media drives and extremely important to the survivability from shock in small drives, see e.g. IBM Microdrive

The Memorex 630 was demonstrated at the November 1967 Fall Joint Computer Conference and first shipped to a Management Assistance Incorporated (MAI) customer in June 1968. A variant, the Memorex 620 was plug compatible with the IBM 2311-11 for use on the IBM System/360 model 20. Because of the rental nature of the IBM peripherals market, these products were mainly rented to IBM end users thru lease/ rental firms such as MAI.

OEM versions of the product were sold to Digital Equipment Corporation (Memorex 630-1 resold as DEC RP01), to RCA Corp. (Memorex 630-2) and others.

Several hundred units were shipped in the first six months of production (2nd half of 1968) at a price in excess of $10k and a cost of less than $4k. The product was quickly replaced by a quadruple capacity version, the Memorex 660.

Provenance note:
Article was authored by Tom Gardner with contribution by John Richards. It was approved at Storage SIG Meeting on June 21, 2011, and published by CHM as Memorex 630 Disk Drive (see Revision 14 for reviewed copy).