Why it’s important
The Memorex 660 was the first disk drive to ship that was pack compatible with the IBM 2314. By the end of 1970 Memorex, Information Storage Systems and a number of other plug compatible subsystems manufacturers were shipping subsystems compatible with the 2314 but offering lower price and higher performance. Because of the then rental nature of the IBM market, an IBM executive described the situation as, "2314s coming back by the train load." 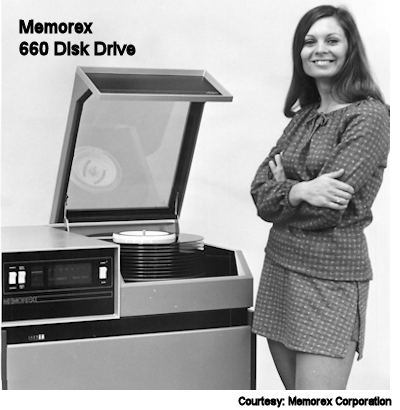 The Memorex 660 was intended to be an easy design upgrade from the Memorex 630 by adding 10 heads and making the associated electronic changes for the additional heads and higher data rate. However Memorex management decided to "improve" the electronics and it's packaging. This activity consumed the latter part of 1968 and was not complete in early 1969, not withstanding shipments to Digital and RCA.

The arrival of Al Shugart, as vice President of Engineering in April 1969 more or less coincided with the departure of the Memorex 630 team (they founded Clasco, Inc which ultimately became the Ampex disk drive engineering group). Shugart recruited a new team who were surprised to find they had to spend the next year finishing the engineering of the Memorex 660. The disk drive engineering effort was headed by Marco Padalino; as shown in this collage the organization ultimately grew to about 80 persons - a careful review will find less than 40 ex-IBMer's therein, far fewer than the 300+ frequently attributed to Shugart's recruitment skills.

Mechanical changes were few, an absolute filter was added, and unlike the IBM 2314, the Memorex 660 had no pack cleaning brushes (IBM abandoned brushes with in its next generation, discovering that rather than cleaning they were actually contaminating).

The product was initially successful in the OEM market with sales to Digital and RCA in1969 and into 1970. When the Memorex 661 Storage Control unit completed its design and shipped in July 1970, Memorex switched its focus to the larger market of storage subsystems plug compatible with IBM mainframes. The Memorex 3660 subsystem was a plug compatible alternative to the IBM 2314 Direct Access Storage Facility and in the Memorex case comprised one 661 Storage Control Unit and one to eight 660 Model 0 Disk Drives. This market was initially a rental market and switched to a lease market (Fixed Term Plan and then Extended Term Plan) as IBM responded to the competition. The financial requirements of a lease market, including the maintenance and re-marketing requirements, caused difficulties for Memorex, but in the end it was able to raise sufficient funds to successfully market large numbers of subsystems.

Beginning 1975, as the 3660 subsystems came off rent, many of the drives were reconditioned and sold to Digital who then marketed them as RPR02's.

Provenance note: This article was originally authored by T. Gardner and approved at the Storage SIG meeting on February 29, 2012.