Why it’s important While technically the first commercial HDD to fit into a 3½-inch form factor, the disk diameter chosen, 96 mm x 40 mm, along with it’s open loop positioning technology, limited the product’s capacity and its market acceptance.

Rodime Limited was formed in 1980 by several key managers from the Burroughs disk drive manufacturing facility in Glenrothes, Scotland. It became a successful 5¼-inch HDD manufacturer of OEM disk drives in 1981 and achieved a healthy growth rate. 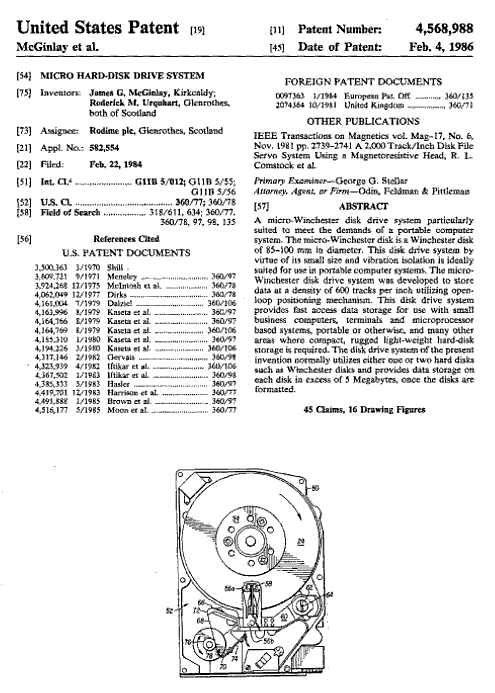 In the 3rd quarter of 1983, Rodime became the first manufacturer of 3½-inch HDD products, with unformatted capacities of 6.38 (RO351) and 12.75 (RO352) megabytes, using disks with the 96 mm outer diameter. In the second half of the 1980's, numerous disk drive manufacturers entered the 3½-inch HDD market, but most used disks with 95 mm outer diameter and smaller inner diameter, which became an industry standard. In the meantime, Rodime had expanded manufacturing from its Scotland plant to additional facilities in Boca Raton, Florida, and in Singapore. Sales of it's 5¼-inch drives were declining due to competition from the 3½-inch drives now aggressively sold by the dozens of manufacturers which had followed Rodime into that market. Rodime was not able to keep up with its 3½-inch HDD competitors' continuous improvements in drive performance and capacity. By 1989, Rodime was approaching bankruptcy, top management was replaced, and in 1991 the company announced it was filing for bankruptcy and stopping the manufacture of disk drives.

It is an urban legend that Rodime invented and patented the 3½-inch form factor. The first products to use the 3½-inch form factor were 3½-inch Floppy Disk Drives announced by Tandon and Shugart Associates at Fall Joint Computer Conference, Nov 1982 and first shipped in 1983, neither company was ever issued a patent on the form factor and it is not clear that the set of dimensions that are a part of a form factor definition could or should be patentable. What Rodime did disclose and claim was hard disk drives having, in part, a disk with outer diameter in the range of 92 to 96 mm (3.6 - 3.8"), see U.S. Patents 4,568,988 (filed February 22, 1984) and 4,638,383 (filed November19, 1985). As it turned out the industry, led by Seagate and MiniScribe had agreed upon an industry standard disk for 3½-inch drives having an OD of 95 mm and an ID of 25 mm as early as 1984 (see MiniScribe 8425) and well before the patents issued in February 1986 and January 1987, respectively. The first Rodime product used a disk of 96 mm OD and 40 mm ID which has a substantially smaller recording surface than the industry standard disk and this deficiency was one cause of the product's lack of success.

Rodime sued most of the disk drive industry for infringement of these patents and collected substantial settlements from many, notably estimated $10M from Conner Peripherals [EN, June 10, 1991, p. 27] and supposedly $26M from IBM. In the end both patents were found to be invalid by courts - with regard to high performance (i.e., servo mechanism) drives in Quantum v. Rodime (1995) and with regard to low performance (i.e., open loop mechanism) drives in Rodime v. Seagate (1997). This latter case was reversed on appeal and Seagate in 2000 settled without a new trial. Quantum was sustained on appeal and therefore Rodime had no legitimate claim on the high performance drives such as produced by Conner and IBM. Unfortunately for them, there is typically no refund if a licensed patent is subsequently found invalid.

After Rodime ceased manufacturing disk drives in 1991, it became a patent troll, litigating its disk diameter patents until they were invalidated and litigating other purchased patents. In 2000 using funds from its settlement with Seagate, Rodime acquired Littlewoods Leisure, the UKs leading gambling pools promoter, changed its name to Sportech PLC and thus exited the HDD industry.

Provenance note: This article was written by Tom Gardner and Version 12 was approved by the Computer History Museum's Storage SIG on June 20, 2012.