Why it’s important The Seagate ST506 reduced the size and price of a hard disk drive enabling the Hard Disk Drive (HDD) industry to ride with and facilitate the explosive growth of the desktop PC industry. By making available an HDD in the same physical size as the 5¼-inch floppy drive introduced by Shugart Associates in 1976 and priced at a new low point for an hard disk drive, Shugart Technology's ST506 made it possible for personal computer manufacturers to easily offer upgrades in storage capacity and access time. 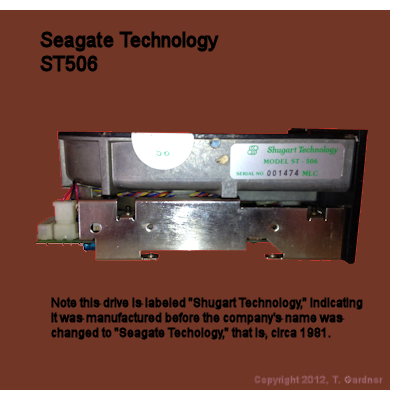 By November 1979 Syed Iftikar, Doug Mahon and Tom Mitchell were recruited as co-founders to complete the founding team. With their extensive industry contacts, they established a development team which was able to complete a 5¼-inch HDD in time to be shown at the National Computer Conference in May 1980, with actual production of 1,200 drives by the end of 1980. Conner insisted the electronic design be based on the SA1000 with the form factor of a full height 5¼-inch FDD.[Note 4]

The company was deliberately named Shugart Technology in the expectation of free publicity from a lawsuit by Xerox Corporation, the parent of Shugart Associates with the rights to use the Shugart name. Unfortunately, Xerox didn’t sue until after the ST506 was delivered to customers so the name was changed to Seagate Technology to avoid legal action. Since product was then shipped and known as the ST506 a name was needed that allowed the "ST" to continue. Al coined Seagate from the letters SGT in his name by combining the words sea gate (he couldn’t find one word with the three letters in order) [2002Shu @ 41:43],

The initial business plan called for shipping 50 units in Q4, 1980, with a floppy replacement rate of 10% each subsequent year. But when Syed had completed the mechanical design in January, 1980, and ordered hard tooled components three months ahead of schedule a new business plan was generated in February, 1980, that specified shipping 1,200 drives in Calendar 1980. The actual number of drives shipped was 1,205. At midnight on the last day of December Tom, Syed and Doug tested and shipped the last 5 drives to exceed the plan for good measure. The founders thought that if 30% of PCs could have a hard drive, then their wildest dreams would have been realized. Today, almost all PCs have a hard drive.

The company’s initial facility was a loft built over a warehouse in Scotts Valley near Carbonero Trailer Park and Leo’s Liquors. Leo’s Liquors became the landmark for providing directions to the company’s facility. The loft was built in two weeks by a contractor, one of the early “venture” investor in Seagate as a part of his contribution. [2002Shu @ 40:30]

Al and Finis looked high and low for start-up funding, visiting venture firms in Silicon Valley, corporations like 3M, HP & Exxon Enterprises and Casino owners in Las Vegas but came back empty handed. No one was interested in a team with no experience running a business and with the threat of a new technology called Bubble Memories pioneered by Texas Instruments. 3M, however, cut out six [2002Shu @ 37:13] 5¼ inch diameter disks from their production 14” diameter oxide disks to play with. Syed used these disks to test airflow and start/stop times using a Pabst fan motor that Bernhard Schuh, the Sales VP of Pabst provided. Tom and Finis were very good at convincing the suppliers about the great market potential for the Seagate drive.

Norm Dion, the CEO of Dysan, agreed to be the initial disk supplier and to provide initial venture funding of $500,000. He insisted that the 5 founders sign a promissory note for $100,000 to pay Dysan back for providing the initial funding. The disk supply agreement was sealed with a handshake and wasn’t documented until later rounds of venture funding.

The five founders invested an additional total of $130,000. With $630,000 in the bank, the team started developing the prototype drives for the National Computer Conference ( NCC) in May 1980. At NCC Finis started showing the product to potential licensees like Memorex, Shugart Associates, 3M , Texas Instruments, Compaq and Honeywell Bull of France, to name a few. TI and Honeywell Bull decided to purchase the license to manufacture and market the ST506 for $5 million each. This became the source of major funding for Seagate. It was very important for Seagate to have multiple sources for its ST506 to promote an industry standard. During its second year of operations and a few months before its public offering, Seagate was able to raise $1 million from a venture capital firm.

In order to convince TI that Seagate was indeed a viable company and not just a loft over a warehouse Finis had a local developer make an artist’s sketch of a new building and had it displayed prominently in the only conference room in the loft. Tom Mitchell paid a tractor driver $100 to drive his tractor up and down the adjacent field creating a lot of noise and dust at the time TI was visiting. When TI saw the tractor they assumed that the construction of production facilities had begun. With the $10 million of license money Seagate was able to lease a newly constructed building that the artist had sketched for the dog and pony show. 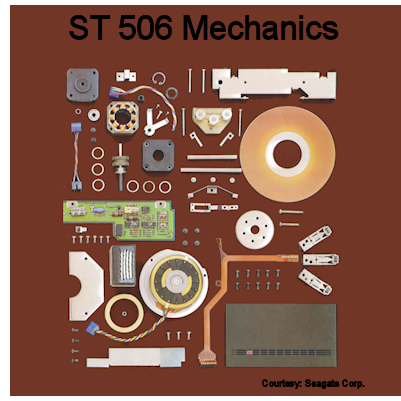 The founders were very hands-on and enthusiastically visited suppliers and customers to pick up components and deliver products to expedite the company’s fast growth in its first year of operation. The design challenge was not so much new technology as it was fitting existing technology into the existing 5¼-inch full height floppy disk drive form factor and making it easy to interface to the PC. Illustrated to the right are all the mechanical parts of an ST506 extracted from a 1981 Seagate brochure. The head and disk were technically not remarkable at 2.8 million bits per inch2 given a state-of-the-art of 3.8 million bits per inch2. [Note 1] What was new were the disk dimensions but Seagate's strategy was to not claim those as proprietary, in order to assure low cost, through industry standardization. Perhaps the biggest technical challenge was open loop positioning of a head at 306 tpi since conventionally hard disk drives had used feedback control systems at and beyond 192 tpi. Through careful selection of materials and properly biased mechanical structure Syed was able to reliably achieve this track density. What is remarkable is the few number of parts when compared to then conventional disk drives which in part was responsible for its low cost. Shugart Associates had pioneered use of a floppy-like interface in hard disk drives for cost and easy of integration purposes; using similar reasoning Seagate adopted a minor variant of the Shugart SA1000 interface as the ST506 interface.

The product was an immediate success. Apple was the fist major customer with a contract for $30 million for head disk assemblies; Apple made its own circuit boards. DEC was also an early major customer using the ST506 in its Rainbow PC (both 8086 and Z80 inside). Al and Finis were invited to show the ST506 prototype at DEC's annual engineering management conference at Stratton, VT (likely fall 1980) probably the biggest exposure they had yet. In traditional Silicon Valley fashion, their first purchase order was negotiated over cocktails and written on a cocktail napkin. Finis saved it and after Seagate, as CEO of Conner he had it framed and displayed, but inside a closet door in his office [Note 3].

The success of the ST506 provided a stimulus for numerous other disk drive manufacturers to initiate 5¼-inch HDD programs, and by 1983 there were 32 manufacturers producing 5¼-inch HDDs, with a worldwide production total exceeding one million drives. The 5¼-inch HDD form factor remained dominant with desktop personal computers until 3.5" HDDs became widely available in the second half of the 1980s. Seagate's success in establishing a major marketing campaign and in obtaining licensing agreements with major firms such as Texas Instruments and CII-Honeywell Bull created a high level of stature in the industry for the Seagate drive and it's interface.

For the first several years of production, most manufacturers of 5¼-inch HDDs used the ST506 interface and its variants which became the dominant HDD interface standard until embedded controllers were introduced in the late-1980s, see Conner CP340A. In the early 1980s, HDD capacities were mostly specified in unformatted capacities, and the ST506 was specified at 6.38 MB, although today we generally think of its capacity in formatted terms, at 5 MB.

Seagate went public in September 1981 and was the dominant supplier of hard disk drives well into the next century.

Provenance note:
This article was authored by Syed Iftikar with contributions from Jim Porter and Grant Saviers. The editor was Tom Gardner.
Essentially in the form of Revision 17 hereto It was reviewed and approved by the Storage SIG on 6/21/2011.