Why it’s important Marks the beginning of the industry's transition from iron oxide media to metallic media. Metallic media permits much higher areal density than the coarse-grained oxide media that had been the industry standard. Carbon over-coating prevents metal corrosion and along with lubricants improves wear to achieve the necessary reliability. Oxide media gradually disappeared during the 1980’s and early 1990’s. 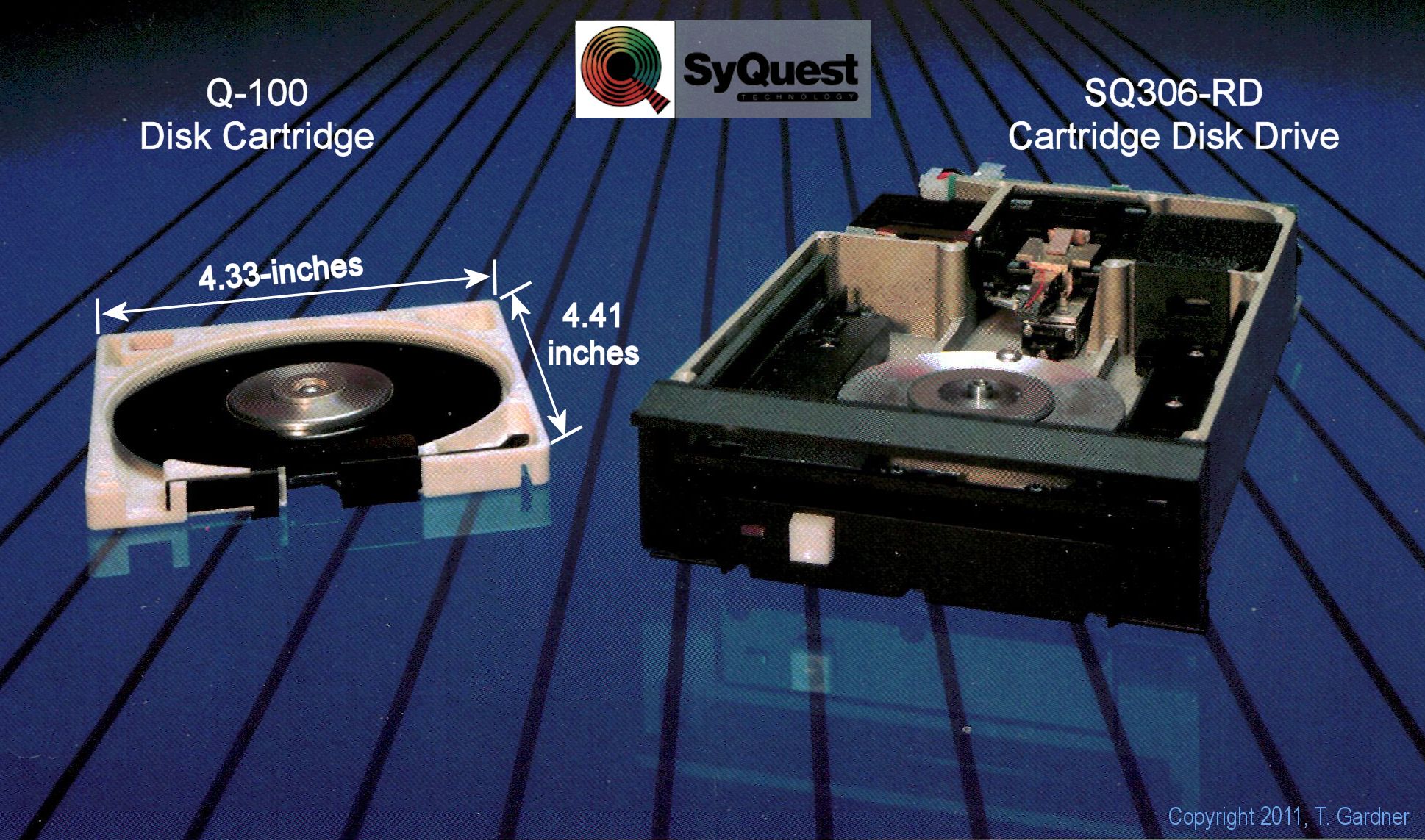 SyQuest Technology was founded in January 27, 1982 by Syed Iftikar, co-founder of Seagate, Ben Alaimo, Bill Krajewski, Anil Nigam and George Toldi with a mission to provide a removable media hard drive for the emerging personal computer market, replacing the slow, low capacity floppy disk drive. The target products were a single disk cartridge and corresponding disk drive with capacity and performance comparable to the then prevalent hard disk drives such as the Seagate 5 megabyte ST-506 Since hard disk drives were sealed and could contain multiple disks the challenge was to find a reliable system that could operate in a somewhat more contaminated environment at at least twice the current areal bit density of conventional hard disk drives.

SyQuest announced the SQ306 in August 1982, and demonstrated the product at Comdex the same year. It was greeted with raised eyebrows and skepticism from the industry experts! How could a start-up with limited resources attempt removability when IBM had abandoned the concept? It was the industry’s first carbon coated metallic disk - to the skeptics this was Mission Impossible! Norm Dion the CEO of Dysan, the oxide-coated disk supplier, called Iftikar to his office and warned him that SyQuest would not be able to overcome the pin holes in metallic disk and the slow corrosion in the field. He was sure the company was doomed.

The SyQuest team managed this task by focusing on three design concepts: a) the disk media and the cartridge, b) the drive mechanism and c) the single ‘wedge’ servo for head alignment and interchangeability.

The cartridge/media team led by Iftikar, Marvin Garrison and Venu Menon reviewed Francis King’s paper [1981King] on a cobalt-nickel plated disk with a protective carbon overcoat. His results showed that conventional ferric oxide coated disks displayed wear marks in about 20 seconds while the carbon coated metallic disks ran for 2 hours. Also, the carbon coated metallic disks showed no signal degradation after 200 hours of ‘in-contact’ operation. The Mohr’s hardness of oxide coated disk is about 3 while the hardness of carbon coated disk is 8-9. Diamond on Mohr’s scale is 10. The SyQuest team felt that carbon overcoating was the technology for future HDDs. King joined SyQuest in 1984.

The first problem was no disk supplier. Since SyQuest’s goal was to replace the floppy and there were two contemporaneous new floppy designs, one by IBM (3.9”) and the other by Sony (3.5”), SyQuest chose IBM’s 3.9 inch design expecting it to become the industry standard. Unfortunately Sony became the standard and SyQuest ended up with a non standard disk size and a form factor too big for the future 3.5” standard. The only supplier of metallic disk was Ampex who was promoting its Alar plated metal disk which was a soap based coating over the metallic film. Promoting its own product, Ampex refused to provide a carbon coated disk. In fact, the general manager of the disk division at Ampex called a meeting of the SyQuest Board of Directors to warn them that carbon coated disks would never become the standard! SyQuest therefore started its own cobalt-nickel plating as well as the carbon sputtering operation. SyQuest developed its own carbon coated media with Monte Edison's Fomblin AM 2001 lubricant coating over the sputtered carbon coating.

Perfecting the carbon coating process wasn’t an easy task for a team that had no experience in sputtering of materials. Progress was excruciatingly slow and frustrating. The team selected two CPA sputtering machines that cost $1 million each. A lot of work was done on target material selection, disk surface preparation, target shielding for uniform coating, vacuum deposition optimization, etc. By September 1982 the team developed a carbon overcoat layer that had the right hardness, lubricity, corrosion resistance, minimum signal loss, met the bending adhesion test, minimum stiction characteristics and was easy to produce in high volume. The team was so confident in the durability of the media that it routinely tested unenclosed media; during a tour the cigar smoking Al Michaels, then of Convergent Technology, was encouraged to drop his ashes on a running exposed disk - it continued to seek with no data errors. [2006Iftikar p. 38] Contamination was in fact a problem and in later SyQuest products significant effort was made to enclose the medium and filter its air supply

By November 1982 SyQuest demonstrated a million seeks by the drive head/actuator assembly on stationary disk with no wear or signal degradation. Once, SyQuest started shipping its products, Ampex decided to supply Alar disks without the soap lubricant for SyQuest to overcoat with carbon. Soon other suppliers like Pravin Patel of Polydisk and Greg Reyes of Domain Technology became SyQuest’s turnkey providers of carbon coated media. Thereafter, SyQuest ceased all disk plating and carbon sputtering operations, selling its sputtering machines to Domain.

The drive team headed by Toldi and Nigam set a goal of making the removable drive act like a fixed drive 10 seconds after spin-up ( Purge cycle). The disk was used as a pump impeller to pump and filter the contaminated air that got inside the HDA during cartridge change. The read/write head assemblies were designed to be aligned to a radial access line from the center of the disk to the outer diameter (OD). The requirement for fail safe insertion and removal of the disk (in its cartridge) required a number of design features that a fixed drive did not have to have, notably a head spreader mechanism that spread the top and bottom heads open like a clam shell to provide clearances when disk was inserted or removed.

The Electronics and Servo team was headed by Alaimo. The drive was designed with a single “wedge” servo on a radial line from OD to ID. This servo was needed to locate track zero, average the misalignment between the top and the bottom heads and compensate for the temperature changes (cold cartridge in a hot drive) that were more severe in cartridge drives than in fixed drives.

During the evaluation phase it was found that after repeated insertion/ejection of the cartridge, the original design of three locating fingers on the disk hub would begin to wear and the runout would exceed 5 times the specification limit which the servo could not compensate. Working furiously, the team solved the problem by redesigning the disk hub with a 5 finger centering hub which provided redundancy for the affects of wear on the fingers.

After shipping the first 10,000 drives in the field, Convergent Technologies, a key customer, started having problems with the SyQuest drives. A quick analysis revealed that the soft ferrite read/write head transducers of conventional heads (i.e., monolithic sliders) were being eroded by the harder carbon coated disks. These drives were recalled and retrofitted with harder ceramic heads. In addition the disks were burnished with special burnishing heads to about 2 micro inches below the normal flying height. After extensive research, the disk lubrication was changed to a thickness of about 20 Angstroms.

SyQuest became the only supplier to the Federal Government Security Programs through OEMs such as Zenith Data Systems, IBM, AT &T and Convergent/Burroughs. SyQuest achieved this with a non standard 3.9 inch disk. The entire HDD industry converted to carbon coated thin film media by the late 1980s.

Subsequently, SyQuest introduced removable hard disk products with disk diameters and form factors corresponding to the 5¼ , 3½ , 2½ and 1.8 inch standards. SyQuest was the only removable HDD startup to go public and at its peak had about 4,500 employees worldwide (1991). It’s 5¼ inch product family set a media interchange standard for desktop publishing applications with 90% of the market in 1991.

Provenance note: Originally written by Syed Iftikar and with contibutions from Francis King it was edited by T. Gardner and approved at the SIG Meeting December 7, 2011. The revision approved is version 24.